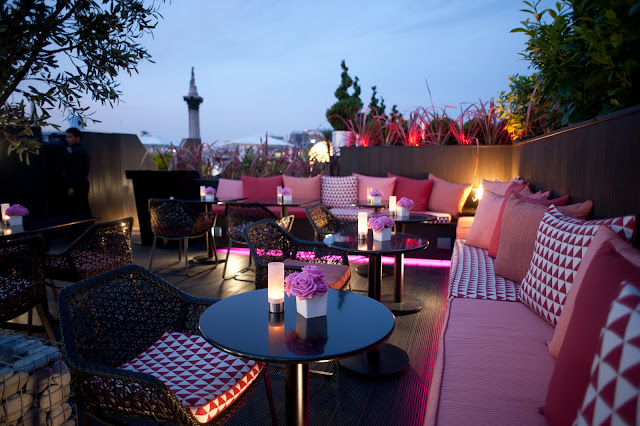 Ideally, midsummer evenings should be spent lolling on loungers in lush Babylonian roof gardens. In my fantasy Cleopatra world, Nubian slaves fan courtiers with palm fronds, Champagne flows from Nebuchadnezzars and I’m chiselled, bronzed, Mark Anthony - as in Cleo’s bit of Roman rumpy-pumpy, not J-Lo’s scrawny fella.  At Vista, the newly enlarged, upgraded, alfresco bar atop the Trafalgar Hilton, the reality is markedly different. As an unseasonably warm spring turns, inevitably, to wet winter in the Shetlands, I could use several of said islands’ woolly pullies. Too cold to hold Midnight at Vista - tonight’s launch party vodkatinis co-ordinating perfectly with my Grey Goose-pimpled flesh - I glower, pit bull-like, at anyone who dares approach the patio heater I’m hogging. Vista boasts stunning views of Trafalgar Square. A less fine prospect, is tonight’s er, warm-up act for Beverley Knight, the main entertainment for the assembled bliggers (bloggers/ liggers). Whose bright idea involved hiring ‘exotic’ (read: tacky) podium ‘dancers’ (read: can’t move for toffee) in swimsuits, heels and floppy hat combos circa Miss Pontins Prestatyn 1972? The charidee bash is supported by a fake tan company but. among the Z-list assembly, TOWIE's Sam Feirs and Harry Shuuut-up-Derbridge’s glows are more Ropez than St.Tropez. To fully appreciate this chic belvedere, go when the sun remembers its job description and Essex is safely holed up at Faces.
Trafalgar Hilton, 2 Spring Gardens SW1 7870 2900
www.hilton.co.uk/trafalgar
Posted by Keith Barker-Main, London at 03:17 Links to this post 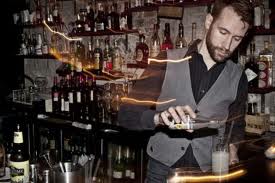 According to Dionne Warwick, ‘loneliness remembers what happiness forgets.’ Did writers Bacharach and David ever imagine their song would inspire a funky East London watering hole? ‘Please don’t call it “a speakeasy.”’ Mr. Head-Shaker tits, worried the term has been inappropriately appropriated by PRs and hacks (guilty) to describe any liquor lounge smaller than Tiger Tiger, the Haymarket meet-market that’s bigger than Bulgaria. He’s not keen on ‘dive bar’ either, although, technically, that’s what this basement snug is. OK, then: Happiness Forgets is a small cocktail bar.... with big appeal. Happy now, mister? I am: we have Head-Shaker’s undivided attention, given the place is (unfathomably) as deserted as a Detroit dollar-a-daiquiri dive (oops, sorry!) that’s run out of rum. Tonight, it seems,  the Happi-inn isn’t for N1’s gelled fin stick-thins, out en masse, for a spot of competitive preening in Hoxton Square. Maybe they begrudge £7 for a top drawer rinse? Their loss! Improved Gin Cocktai, Sazerac and a bone dry Martini are irreproachable. Knocking out flawless classics, not farting around with faddy ‘molecular’ malarkey, is HF's mission statement. I like the look of Harry Palmer (Maker’s Mark, Suze and vermouth). Named after Len Deighton’s spy from The Ipcress File, it’s fatal for Cainers, out dangerously late on a school night. Unaware that I write for the paper, Head- Shaker tells me a PR (I know who you are) dropped in, warning him that the only way his bar could be guaranteed a review in Metro, was if he hired her. Let's be clear. A: it doesn't work like that. B: his bar just got a great review from me... in print...gratis! Update (June 2012). My review and subsequent praise elsewhere have placed this puppy front-of-brain for any booze-hound headed Hoxton way. Prices may have nudged up but standards have deffo not dropped. Journalist and a top tart absinthe and apple sour whose name escapes my one remaining brain cell (Alistair Head-Shaker will know) are your current best calls at this fine basement open, sadly, no later than 11pm.
8 Hoxton Square, N1 7613 0325


Posted by Keith Barker-Main, London at 06:19 Links to this post 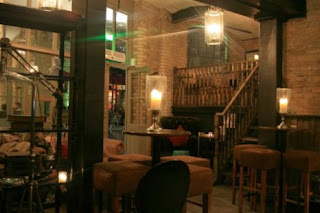 The initials VOC stand for The Dutch East India Company in the native tongue of those former sea traders. It’s to their times and those Oriental climes - with a little help from the crew of the good ship Purl in Marylebone - that VOC, a new punch house in King’s Cross, looks for inspiration for its recherché rinses. Small is beautiful, they say; and the diminutive VOC is certainly that. A looker too - judging by the beatific smile on the face of coquettish Filipino star waitress, Mary, whenever she contemplates him - is VOC’s Italian mix-maestro, piccolo Alex Palumbo. Like Mary, I’m similarly smitten; at least, on a professional level. Passionate about his craft, Alex bids us taste his home-made bitters, infused rums, barrel-aged grogs and arcane flavourings retrieved via a ladder that leans precariously against a lofty back bar. Unaware he’s in the presence of the drinks industry’s equivalent of the Pope (my chum), and a serial Sazerac sponge (that’ll be me), his enthusiasm is not put on for PR effect. From a deadly arsenal, he unleashes killer Bergamot Grog (£9), New Orleans classic, Vieux Carré, and the liquorice-y Brandy Cocktail served in a chalice. A tenebrous tobacco-tone parlour, VOC could be the background to a Dutch old master’s portrait: thanks to Alex’s masterly mixology, expect VOC to be mobbed by discerning (Vermeer) kats ‘ere long.
2 Varnishers Yard, Regent Quarter, N1 7713 8229
Posted by Keith Barker-Main, London at 05:39 Links to this post

The Mayor of Scaredy Cat Town, Somewhere in London

By Chinese whisper, I hear of a speakeasy that goes by the unlikely name of The Mayor of Scaredy Cat Town. When I the phone number below, we’re told to turn up at a City fringe location and await further instruction. Memories of car parks off the M25 and gurning to ‘acieeed’ house at illegal raves come flooding back. Arriving at the appointed hour, we’re identified by Secret Greeter and escorted into a busy diner where all is not what it seems. My lips are sealed; but I’ll cryptically offer that the hidden entrance we’re whipped through when no one is watching, is the height of ‘cool.’  Beyond it, a ‘chill-out’ zone where Negroni and Lynchburg Leith Lemonade (the American classic laced with Scotch) are rustled up by a looker Models 1 might want to check out... if their scouts can find the place. The clandestine juke joint rocks to ballsy blues; notorious growler, Big Mama Thornton, ripping the throat out of Leiber and Stoller’s Hound Dog. No bigger than my sitting room, this deep bunker will survive nuclear Armageddon. I had hoped for unbridled debauchery and deeply dodgy behaviour but tonight’s tame collection of cockroaches look to have been rounded up at Starbucks and the lower echelons at Natwest HQ. There are some strange outfits too. Are Spam pink legs encased in bubblegum pink Lycra cycling shorts, worn under sheer tan tights with kitten heels, 'on-trend?' I consult a friend, the editor of Grazia. They are not, it transpires.  If the Mayor can rope in friskier katz and more stylish moggies and make his drinks portions a bit more generous - a £7.50 Dry Martini occupies less than half the glass it's served in - he’s in business. Bidden ‘to-de-loo’, we’re escorted out via yet another secret portal. Emerging from a dustbin, Top Cat-stylee,  to evade Officer Dibble, would have been an even better exit strategy.

Unless you’re an oligarch’s spoilt brat or one of TOWIE's more cash-than-dash dumbos - in which case, you won’t really get the understated sophistication of Bassoon at the Corinthia - there’s a price point for cocktails above which sensible souls will not venture. When I was an apprentice lounge lizard, that ceiling was a shilling; a princely sum that secured a port and lemon and a bag of scratchings back when the Queen’s tongue-tied old man was still on the throne. Fast forward to 2011, and I’m the one left stuttering at The King’s Speech: at nigh-on twenty knicker, this champagne and Chambord fix costs a king’s ransom. It’s all relative, of course: my stylish arm candy is delighted with her Mantovani - a Hendrick’s-based concoction named after the band leader who played here in its 1930s heyday as The Metropole before providing the ethereal soundtrack to countless cremetoria. Were she paying (seamless service and candied/ savoury snacks included, or not): ‘what berk blows £16.88 on a drink?’  This, from Lola in twice-worn Louboutin spikes whose £695 cost would stock my drinks cabinet for a year. Check out Bassoon by all means - David Collins’s classy pastiche of an ambience feutrée Parisian piano lounge circa Léger - but be prepared to punish the plastic or pimp yourself out for the price of its Gimlet.
Corinthia Hotel, Whitehall Place, SW1A 2BD 7930 8181
http://www.corinthia.com/en/London/home/
Posted by Keith Barker-Main, London at 04:50 Links to this post