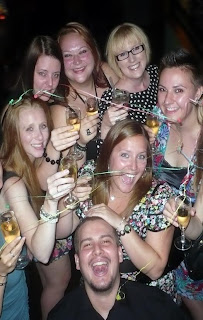 A door gorilla eyes me with suspicion. I'm outside Adventure in Covent Garden. En route to a bit of a do,  dressed in black tie, I'm keen to have a quick butcher's. Is the suturnine one about to warn me I'm way too chic for what was once backpacker pit, Bok, a place guaranteed to 'gie you the boak', as the say in Bo'ness and Brechin? Whatever. He makes no attempt to deter me, so preoccupied is he with his own thoughts. Pensive, miserable, Is he wondering why he ever left his reassuringly humdrum life in Dresden, Droylsden, Drabsville South Africa or some other dump whose residents dream of London's gold pavements to be stood on those very same sidewalks for whatever sum he's earning per hour? Adventure, it transpires, is a new uptown adventure for a trio of similarly-named south London bars. The basement bunker boasts two bars in a long vaulted industrial-style corridor with high banquette seating. The overall impression is one of drinking in a glorified London Underground tunnel - the Party Line, perhaps. The price of  a cocktail - nigh on £10 - is about the same as for a return to Finchley Central these days, only with much better customer service thrown in: who'd have ever thought it?  The place is clearly a popular post work kick-back, thanks to special deals and happy hour until 7 pm when £9.50 bags a brace of cocktails from an unexpectedly interesting list that runs to apple martini and Uncle Vanya (an Absolut vodka, crème de mure and sours mix). I'm not sure who'd want the frozen black Irish and the Malibu, chocolate, nut and creamy confection that is Umpa Lumpa.  Willy Wonka’s vertically-challenged helpers are the only ones not at risk of banging their heads on Adventure’s low brick walls. Wines from £15 mean the adventure continues until midnight. Will I be hurrying back? Based on this photo of a typical cross-section of customers; what do you reckon?
20 Bedford Street WC2 07739 325180 www.adventurebar.co.uk

Adapted from a review at www.squaremeal.co.uk.
See even more like this at www.metro.co.uk
Posted by Keith Barker-Main, London at 04:01 Links to this post 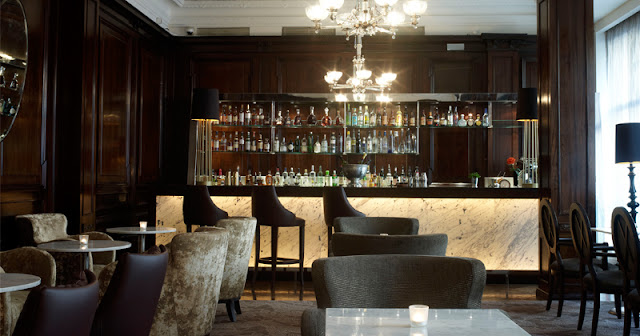 What dash was once cut at The Waldorf’s Palm Court, the place where London's Brilliantined rakes and derring-do dames learned to tango, was lost as the hotel, then synonymous with elegant living, faded into mediocrity and the beau monde deserted her. Part of a major makeover by Hilton, its new 1920’s-style lounge - named after former resident big band leader, Howard Godfrey - hopes to attract today’s generation of cocktail-mad young things. And, why not? Any list that includes well-executed revivals Martinez and pre-Prohibition-era pink Philadelphian, lovely Clover Club, deserves respect. Alas, house signatures underwhelm. Rosemary-anointed foamy flip, Spring Memories won’t spring to my mind in a hurry and prissy pink Refined Madam’s Tanqueray 10 is better in Waldorf-tini, a hoochie coochie that’ll show any punter a good time for £17. ‘Edible gold flake don’t come cheap, dearie!’ Served in a hip-flask, bourbon blast The Astor is a cute idea. Other ideas, such as art deco atomisers for perfumed finishing spritzes, reference rivals: The Dorchester, for example. Presided over by the capable Nelson, a Portugeezer who knows what to do with a shaker, a handsome illuminated onyx bar cuts it, but the room, all penumbral (listed) panelling, needs lighting tweaks for warmth and interest. Elsewhere, stylistic affectations such as an ivory tinkler’s straw boater (naff) and a bowler-hatted lanky doorman’s too-large uniform (Freddie ‘Parrot-Face’ Davies?) - amuse. Godfrey’s report card? Good: could be very good.
Good Godfrey’s, Waldorf Hilton, Aldwych, WC2B 4DD 7836 2400
http://tinyurl.com/66qwppa
Posted by Keith Barker-Main, London at 06:25 Links to this post

Giant Lewis Carroll-esque figures greet us outside the Piccadilly Institute, a Jabberwocky among gin joints. Its Twilight world tangle of themed bars attracts impressionable souls who pee their pants over R Patz but settle for drenched-in-Lowcoste-aftershave Olly Murs-alikes in too-tight shiny tailoring. Formerly On Anon - whose hilarious Canadian lumberjack cabin, now defunct,  was as kitsch as anything on Hi Di Hi -  the rambling pile’s darker new gothic trappings are supposed to design a fun adventure playground. I admire Damien Hirst-y diamond-clad antler chandeliers and Clinic, a crepuscular conspiratorial Dickenisan cocktail laboratory its white tiled walls lit cough linctus amber. Somewhere in the building's bowels, there's a Zen 'garden', I'm told, but my barnav clearly isn't working tonight. I settle in another of its half a dozen bars (called Noir) where my £6.80 ‘margarita’ is crafted by a blonde lovely in black rustling tulle tutu. Frankly, Desmond Tutu could do no worse: served in a warmish glass sans salted rim, it’s the vilest lip-puckeringly acidic trauma I’ve suffered since, off my nut , I once licked a lime fragrance toilet block to win a bet. If this is a margarita, my name’s Margarita Pracatan. ‘How about a dry martini?’ I ask, not unreasonably, of somewhere that offers cocktails. Ms Tutu glugs dry vermouth in a glass, enquiring cheerfully if I ‘want anything with it?’ Happy hour, I like... but amateur hour? My advice? Ladies, stick to Heidsieck (it’s champagne, not a nursery game) and dump Olly, Sex on the Beach and Lime Slime shooters for someone who’ll introduce you to grown-up drinking dens like Hix a short stroll away from this theme park aimed at the sort of people who watch TOWIE on TV...but not in an ironic way.
Posted by Keith Barker-Main, London at 03:05 Links to this post