Terrace Bar at The Chesterfield, Mayfair 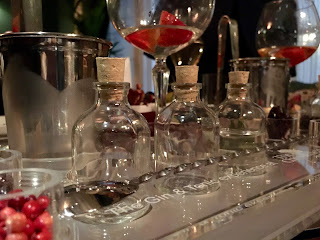 Being asked to list my top 10 London hotel bars is a challenge I find almost as impossible as declaring my favourite Sinatra tracks; there are just so many classics to choose from. I love hotel bars. Old and new. Odd, then, that despite The Chesterfield Hotel having been around for longer than that other old Mayfair fixture, Nancy Dell Olio, I'd never set foot in it until the other week when its PR invited me to its Gin and Tonic Experience. I'm not a massive G and T man - better Tanqueray 10, No.3 or (if I'm lucky) Beefeater Crown Jewel (a no-longer produced, rare red letter day treat) in a bone dry martini - but the Terrace Bar's table-side tasting / tutorial has to be one of London's best value deals, a steal at £22. Knowledgable staff suggest a flight of three top notch gins, picked according to the guest’s palate, each paired with its ideal tonic water and a sprinkle of its key botanicals and spices to accentuate the gin’s DNA: Martin Miller’s and Mediterranean Fever Tree, served with strawberry and crushed black pepper,one particularly harmonious marriage. Moreover, the Gin and Tonic Experience's custom-made presentation set (pictured above) is exquisite. As for the room the tasting takes place in, The Terrace Bar is the sort of place I imagine Lucky Lucan might haunt had Scotland Yard's most wanted Lord not vanished without trace on a murky November night in 1974, wanted for murder. All forest greens, froufrou swags, butch dark woods and tobacco leather and polished barmen, suave in crisp white tuxes, The Terrace Bar epitomises Establishment elegance; its style harking back to The Chesterfield's creation after WWII, when the hotel was formed from three town houses, each rich in history. Sir William Harcourt, The (Liberal) Chancellor of the Exchequer that, in 1894, introduced death duties ("boo!") was one former inhabitant, as was William IV's bit-on-the-side, the actress Dorothea Jordan, who bore him ten illegitimate sprogs in as many years; one of whom was the great-great-great-great-grandmother of the current MP for Witney - David William Donald "Call me Dave" Cameron. (Insert your own joke about Tory bastards). When the miserly monarch had the cheek to suggest a reduction in his brood mare's allowance, the exasperated luvvie handed the tight git a playbill on which her caustic scribble: 'no refunds after the rising of the curtain.' Far from fuddy-duddy, the Terrace Bar's cracking cocktail list mixes modern innovation and reasonably priced classics in equal measure. Served in a jolly yellow earthenware ‘hive’ over honeycomb ice (pictured below), the latest buzz is a summery vodka, limoncello and lavender flower sour, sweetened with honey gathered from the hotel's rooftop apiary’s 40,000 bumblebees.  Snacks - crab cakes and piquant welsh rarebit (offered gratis) - are on-the-money. Silver service is slick; efficient staff super-sweet and attentive. A pianist at a baby grand plays standards. "There's A Small Hotel"....and it's just "Too Marvellous For Words" as Sinatra sang it.
35 Charles Street W1J 5EB 7491 2622 www.chesterfieldmayfair.com 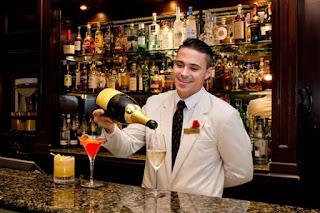 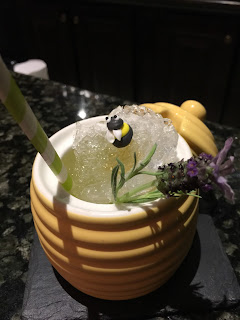 Posted by Keith Barker-Main, London at 05:58 Links to this post 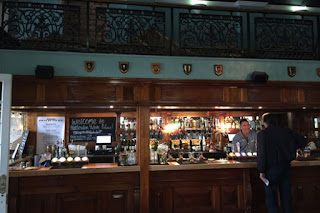 Opened in 1912 when the year's silent movies included The Conquest Of The Pole; The Musketeers Of Pig Alley; and The Water Nymph, by the 1980s, The Harlesden Picture Palace was reduced to screening blue movies - Musketeer Pigs' Poles' Conquest Of The Water Nympho's Alley among them, no doubt. Latterly, the old flea pit's fate was to host a Wetherspoon's pub. Fortunately, the curtain has fallen on that turkey and The Picture Palace can once again expect a full house in its new incarnation as funky bar, a feature attraction in up-and-coming (I'm told) Harlesden. Owners Antic - whose stable of quirky suburban socials include Deptford Job Centre, Balham Bowls and Farr’s School of Dancing in Dalston - have restored the place to something like its Edwardian prime, with a liberal sprinkle of 50s styling and fascinating film memorabilia. Set under the original balcony, lit by art nouveau crystal chandeliers, a long rosewood bar’s hand-pulls dispense Ladbroke Grove microbrewer Moncada’s Notting Hill Amber, great stuff from from Redemption and the owners’ own craft beer, The Full Monty Volden. Democratically priced wine includes the ubiquitous Picpoul de Pinet at just shy of £20. DJs play until 1.30 am at weekends when funk, jazz, ska, soul and popcorn (obscure, cult 1960s pop as played in Belgian dance-halls) are in the mix. Burgers and sandwiches will be served whilst a full kitchen is installed, planned for autumn 2015. Another silver screen star idolised by the flea pits original customers was Mary Pickford who starred in over 30 films in 1912 alone. No sign here of the classic rum and pineapple cocktail created for her when she visited the Hotel Nacional in Havana with Charlie Chaplin and Douglas Fairbanks, sadly

adapted from my review for www.squaremeal.co.uk
Posted by Keith Barker-Main, London at 07:58 Links to this post